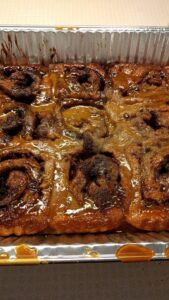 Over the years, my cinnamon rolls have been called everything from “amazing” to “legendary”. I have given them as gifts, I’ve donated them to various events over the years, and I’ve even bartered with them. They’re not inexpensive to make, and they’re a lot of work, but baking these cinnamon rolls has always been an act of love for me.
While my friends and family understand the awesomeness of these cinnamon rolls, I thought I’d publish a blog post for folks who’re wondering if they’re really worth it.

I’ve put a lot of thought and care into my ingredients. The dough for these cinnamon rolls contains real, rich ingredients like eggs, butter, and heavy cream. The filling and the caramel topping also help to set my rolls apart. A lot of cinnamon roll recipes call for white sugar and a touch of cinnamon in the filling, but my recipe uses brown sugar and enough cinnamon to assure you that you’re not just eating “sugar rolls”. The caramel used for the topping makes the most delicious caramels you’ve ever had, and unlike most caramel recipes, this recipe uses brown sugar and honey instead of white sugar and corn syrup. I also use sea salt to give it that perfect blend of sweet and salty.

And when it comes to the size of these rolls, everyone who’s tried them has been thoroughly impressed. When I first started making them, I quickly discovered that I needed a very large pan for each batch. The ingredients alone weigh over 90 ounces! I bake each 15-roll batch in a full size steam table pan which is about 12”x20”, so these bad boys are much larger than anything you’d typically see in the store.

They’re perfect for an occasional treat or special occasion. If you like caramel and you like cinnamon rolls, I’m certain that you won’t be disappointed!